Hamadan province is of the ancient provinces of Iran. Center of this province, the ancient Hamadan city, was built by the Median king Deioces under the name of Ecbatana. This province is quite rich in terms of its climate and natural factors and has many famous natural attractions such as the Ali Sadr cave. Also, Hamadan province, due to its history and ancient civilization, is considered to be one of Iran’s top ranking places in terms of history and ancient relics and has always been noteworthy for tourists and archeologists. The tomb of Esther and Mordechai which is one of the most holy places for the Jewish people is also located at this province. It’s also worth mentioning that Hamadan province used to be part of Kermanshah province and it was separated from it on 1973.

Qorban Tower, Hamadan
Hamedan, the ancient and legendary city with a brilliant background and rich culture has always been the cradle of civilization, science, art, wisdom and mysticism. However, the city has many attractions like other cities and one of the unknown attractions is Qorban Tower in Zandi Neighborhood near Ibn Sina High School. It is a 12 side brick tower with a pyramidal dome with 12 pieces of brick. There is also an inscription on the srypt portal of the tower which dates back to 1009 hijri year. This monument is the tomb of Sheikh al-Islam Hassan Ibn Attar Hafiz Abu al-A’laa Hamedani and a number of Seljuk commanders. This tower was registered in the list of Iran’s national and historical monuments on 1354/3/28 with registration number 1078/3. 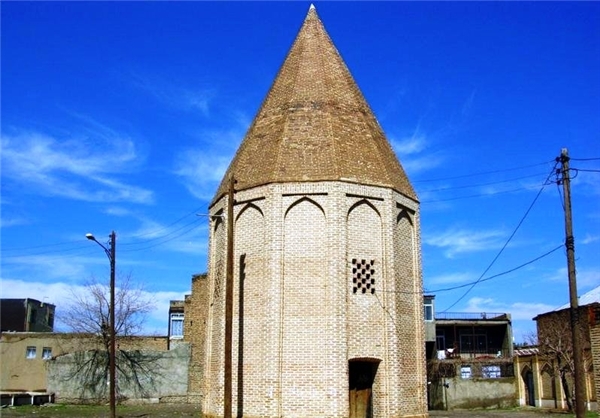 Jameh Mosque, Hamadan
The building is on Ekbatan Street, near Imam Khomeini Square in Hamedan and is the oldest and reliable mosque in Hamedan. According to the architectural features and available inscriptions, the current building of the mosque is for the Hijri year 1253 and after that. However, by studying historical resources, it can be said that the primary building of Jameh Mosque of Hamedan dates back o the first Islamic centuries. The current building of the mosque is in a disordered geometrical form and has a rectangular scene in the middle, 3 porches in southern, eastern and northern directions, several bedchambers, domes and dome homes, 6 minarets and several chambers. Some parts of the mosque have joined other Qajar building in the recent century. The mosque is registered in the list of Iran’s national monuments with registration number 1733. 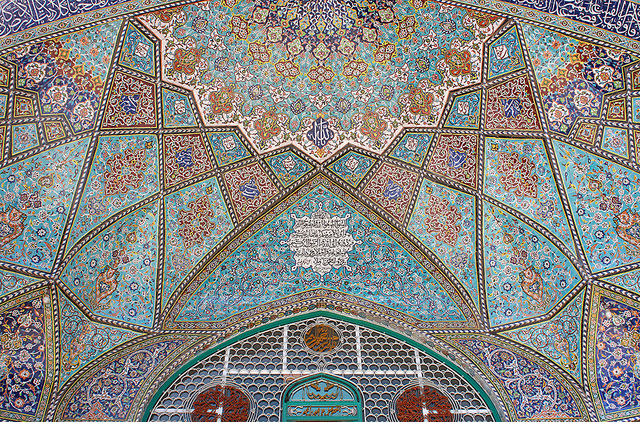 Ganjnameh of Hamadan
There is an impressive waterfall as well as pleasant nature known as “Hamadan Ganjnameh” in Alvand Mountain near Hamadan. To stone inscriptions, remained from Achaemenid Dynasty, attract attention in the middle of nature next to the waterfall. Each of These two historical inscriptions has been carved in three languages, namely Old Persian, Babylonian, and Elamite languages. The left-side inscription is a bit higher with the name of Darius the Great, and the right-side one is a bit lower with the name of Xerxes carved on it. The inscriptions were decoded and translated in 1941 AD. Ganjnameh has a high potential not only in tourism and ecotourism but also in terms of cultural and ancient values. Hamadan Ganjnameh Inscriptions were registered in Iran’s National Heritage on January 6, 1932 under the registration number of 22. 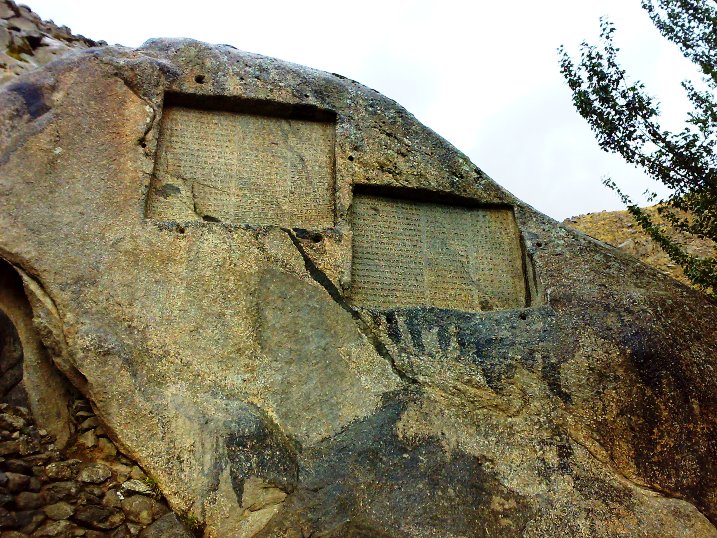 BabaTahir Mausoleum, Hamadan
Baba Tahir or Baba Tahir Oryan is an Iranian mystic and Do-bayti (Persian quatrain) poet who lived from late 4th century to mid-5th century AH (Century 11 AD) in the time of Seljuk Toghrul-Beg. Baba Tahir’s poetry has been written in either Hamadani or Luri dialect. “Baba” (Father) as a sobriquet given to devoted disciples, and he was called “Oryan” (Naked) because he had dismissed worldly concerns. In Lorstan, “Baba” is used for spiritual guides of Ahl-e Haqq (People of Truth). There is not enough information about Baba Tahir’s family and life. According to Najmoddin Rawandi in Rahat al-sodur, Baba Tahir visited Seljuk Toghrul in 447 AH and was respected by him. The Tomb of Baba Tahir goes back to Seljuk period. It was occasionally refurbished and finally, it was constructed in the way that we can see today. This historical monument was registered in Iran’s National Heritage on April 10, 1997 under the registration number of 1780. 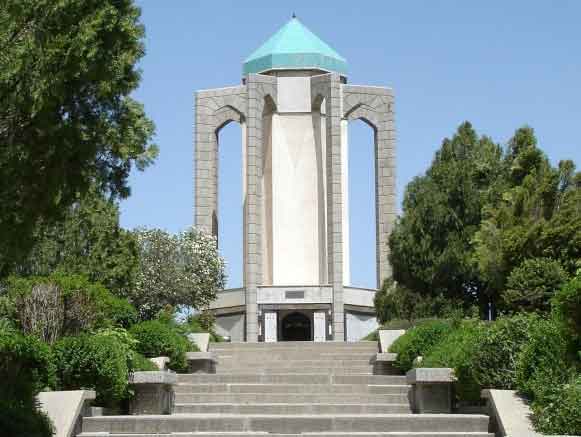 Avicenna Mausoleum
Avicenna is one of the renowned scientists and geniuses of Iran and the world whose works, especially “The Canon” which was a medical encyclopedia, have been translated in several languages and taught for years in the most prestigious universities all around the world. This brilliant scientist has eminent works and profound knowledge about various sciences including philosophy, mathematics, medicine, natural science, occult science, music, and psychology. He has authored 450 books on a variety of fields, mostly medicine and philosophy. In his “History of Science”, George Sarton mentions Avicenna as one of the greatest medical thinkers and scientists. His most famous works are “The Book of Healing” and “The Canon of Medicine”. The current tomb of Avicenna is in the houses of Abu Sa’id Dakhuk, his old friend. Avicenna spent some time at his house as a guest. The remains of his body were transferred to and buried in that house. The tombs of both of them are located there. This monument was built by the great architect, Hooshang Seyhoun. The construction of this monument was inspired by Gonbad-e Qabus (Qabus Dome), an architectural masterpiece in Islamic history of Iran. Avicenna’s birthday, i.e. August 23, is commemorated as the National Doctors’ Day in Iran. 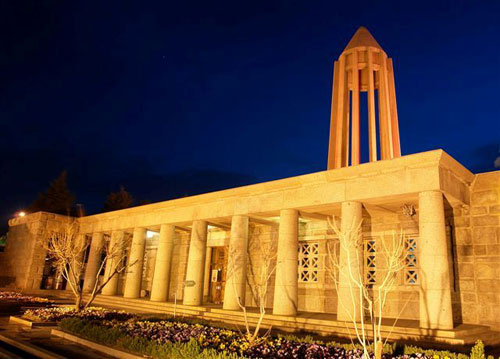 Ali-Sadr Cave
Ali-Sadr Cave is one of the tourist attractions of Hamadan Province. It is the world's largest cave. According to geologists, the stones of this mountain belong to the second geologic period, i.e. Jurassic Era (136-190 million years ago). Evidence from the cave indicates that Ali-Sadr Cave has been used as shelter by primitive men. Extraordinary natural patterns such as Statue of Liberty and name of Allah have been carved on the limestone walls of the cave. 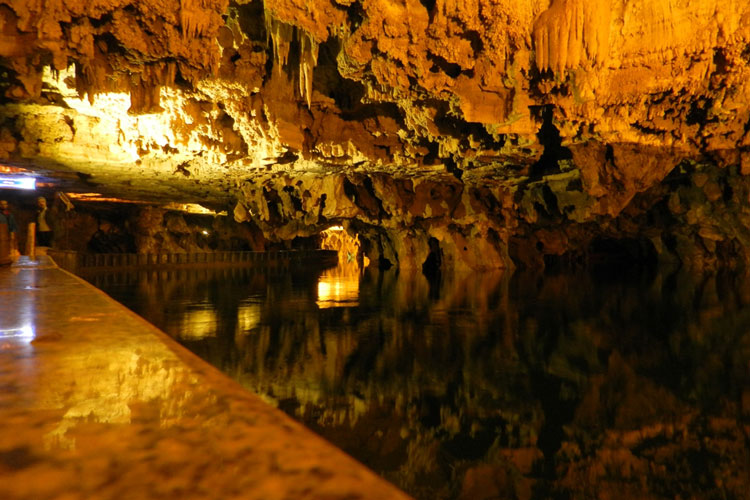 Ecbatana Complex
Having an underground city in its heart, Ecbatana Hill in Hamadan boasts its 3-year-old background. Ecbatana was established by Aryan people of Media in Hamadan. They chose Ecbatana as the capital of the first Iranian kingdom. Herodotus attributed its construction to Deioces, the first Median king. According to him, Ecbatana had seven walls each of which had the color of one planet. Some factors such as social and cultural growth, contact with native people who inhabited in Iran’s Plateau, the existence of powerful neighbors, and new political and social demands forced them to become united and create a powerful government in a way that they could wipe the most powerful tribe of that time, i.e. Assyrians off the face of the earth forever. This area is also known as haft Hesar Palace. 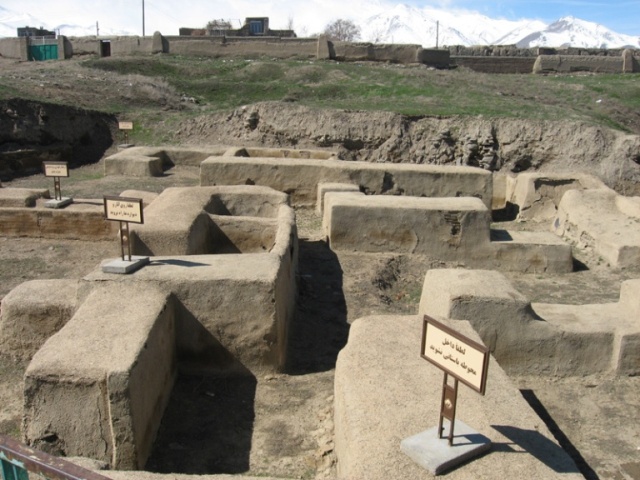 Varkaneh Village
Varkaneh village of Hamadan is one of the six touristic villages of Hamadan, it is registered in the list of national relics and is considered as the special touristic area of the country. Varkaneh village is unique for using native and local materials, especially the stony materials are unique and the usage of stony as a common and popular material is apparent clearly in the face of the village. The background of Varkaneh village goes back to more than 400 years. Its first and eldest neighborhood is Darb Masjed. 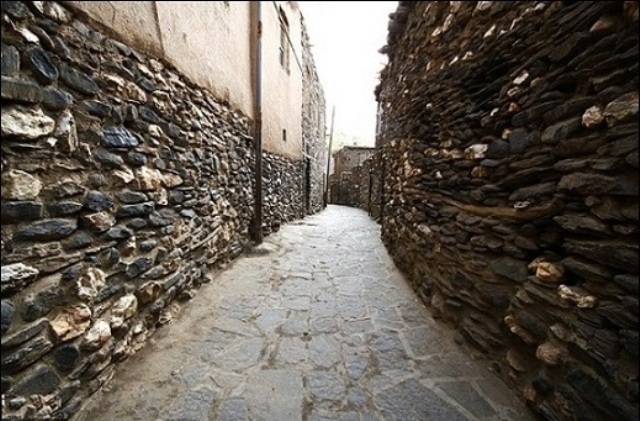 Alavian Dome, Hamadan
Based on the technical identity of the monument, this dome is remaining from late Seljuk era in sixth hijri century which was first established as a mosque by Alavian Family. In the next periods, it wsa changed into a tomb for Alavian family by creating a cellar in the basement. This monument is one of the architectural and molding masterpieces after Islam in Hamedan and was registered in the list of national monuments on 1310/10/15 with registration number 94. 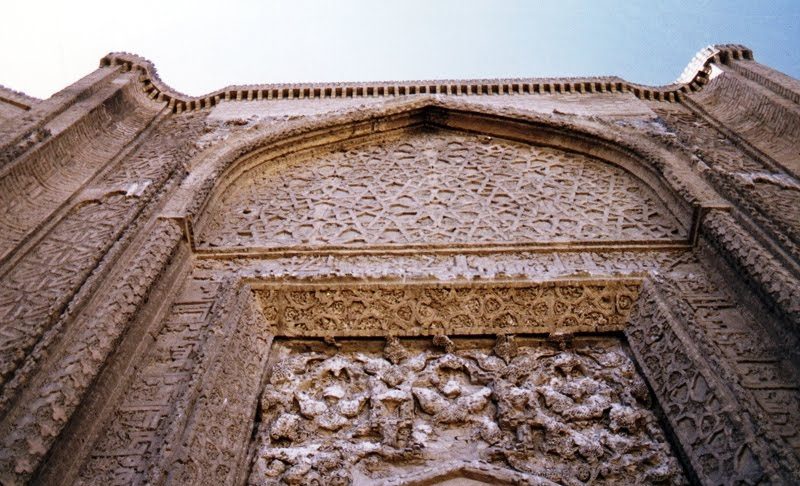