Lake Urmia
Lake Urmia, previously known as Lake Rezaiyeh, is located in the northwest of Azerbaijan District. According to the latest country subdivisions, Lake Urmia lies between East Azerbaijan and West Azerbaijan Provinces. After Anzali Lagoon, The National Park of Lake Urmia is one of the most interesting natural habitats in Iran. This ecosystem has been registered internationally by UNESCO as a protected area. Iranian Department of Environment has identified most parts of this lake as national park. Lake Urmia is the biggest inland lake in Iran and the second salt lake in the world. It is the largest water of Western Asia which is located in the northwest of Iranian Plateau. The lake water is too salty, and it is mostly fed by Zarrinehrud, Siminehrud, Aji Chay, Gadar, Shahar Chay, Nazlou, and Zola rivers. 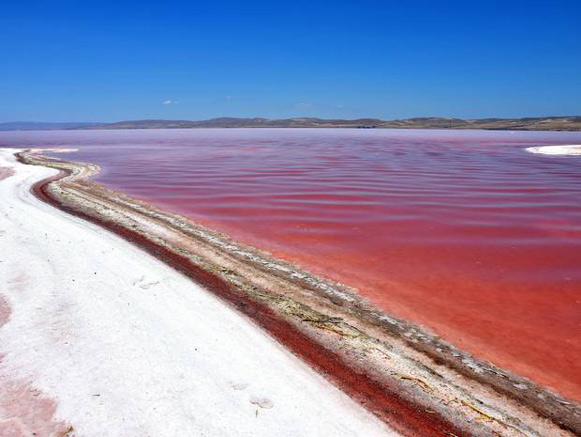 Takht-e Soleyman
Takht-e Soleyman (also known as Azar Goshnasp Fire Temple) is the name of a large historical area near Takab and Takht-e Soleyman village (previously known as Nosratabad) located in West Azerbaijan Province, 45 kilometers northeast of Takab. Takht-e Soleyman is an ancient area consisting of some Sasanid palaces and Azar Goshnasp fire temple. Near this area, there are two other ancient complexes named Zendane-e Soleyman (Prison of Solomon) and Takht-e Bilkis. Some evidence of Medes and Schytians has been found around Zendan-e Soleyman which prove that this area dates back to 1000 years before Christ. Some historians call this area "Shiz Ancient City". Shiz has been accepted by UNESCO as the world heritage, and it is going to be reconstructed in the near future. In recent years, during research on Paleolithic Era, two ancient areas were discovered in takht-e Soleyman. Also, Chal Tappeh, the temporary residence in Middle Paleolithic Era, and Chaqmaq Li area with some evidence of tool-making has been discovered in this area. The oldest pre-Islam discovered remains of Takht-e Soleyman world heritage complex belong to Paleolithic, and Chalcolithic Eras, Iron Age 1, 2, and 3, and Sasanid historical period. Although the area is called Takht-e Soleyman, it had various names such as Ganzak, Ganjeh, Ganjak, Gazka, and Shiz in the past. It was known as Takht-e Soleyman in Safavid period. 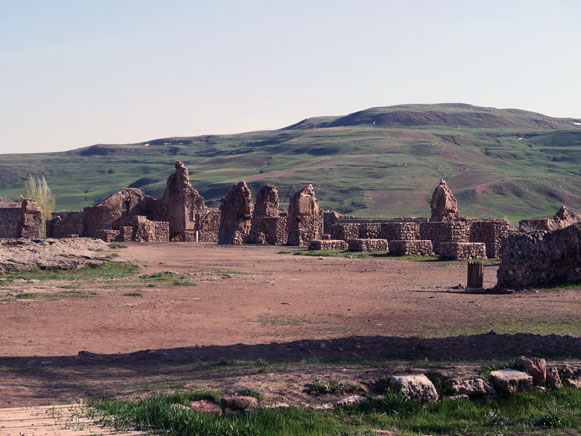 Ancient Teppe Hasanlu
Ancient Tappeh Hassanlu lies in Naqadeh County green region in the southwest of Urmia Lake, West Azerbaijan Province. It is located 7 kilometers northeast of Hassanlu Rural District and that is why it is called Hassanlu Hill. This ancient area dates back to 6 thousand years BC. The most well-known ancient monument found in this area is Hassanlu Gold Cup which belongs to the Iron Age and is kept in Ancient Iran Museum. This cup is one of the most important scientific discoveries in the history of Iran's archeology, and is considered as the rarest artistic, religious and historical monuments of archeology. A variety of weapons like swords, daggers, spears, and bronze and iron bayonets as well as pottery and different bone, stone, clay, glass and metal objects have been discovered in Tappeh Hassanlu. Each of these discoveries have historical, archeological, and artistic values, and they are kept in museums of ancient Iran, Azerbaijan, America, France and other counties. 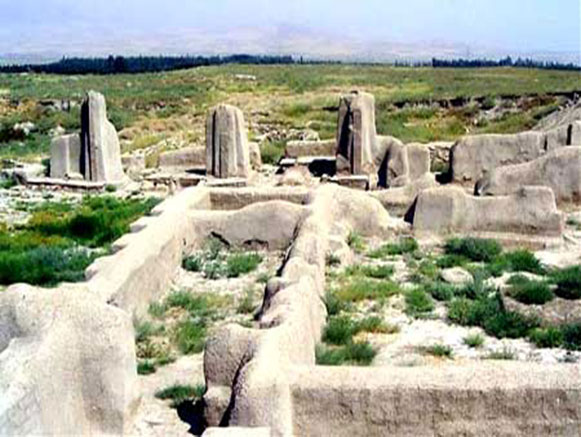 Chapel of Dzordzor, Maku
Chapel of Holy Mary which is also called the Chapel of Dzordzor is one of the most visitable historical monuments in Iran. A villag called Baron exists beside Baron Dam, 13 kilometers from Maku. The chapel of Holy Mary was built by Asghaf Besdachi Zakaria from 1315 until 1324. This monument is in the list of UNESCO world monuments. The name of the chapel was “Chapel of Dzordzor” from the beginning and that was for the fact that it exited in a period supervised by Hovhannes Yerz, Dzordzortsy painter. The chapel is cross-shaped and is like a small praying room. This monument is made of carved stones in different sizes. The chapel façade is very simple and it is decorated by only several windows and shutters with engaged columns that end up in a pointed arch. This chapel has been displaced! It happened in 1367 and the cause was that the chapel building might have been ruined while reconstructing Maku plains. The Cultural Heritage Organization transferred the chapel to a safe place with the help of Armenian caliphate in Azerbaijan. Transferring the chapel took 25 days and having numbered them, every single stone of the chapel was transferred to the target place as it was at the beginning. The new location was 600 meters away and on a rock hill 110 meters higher than the primary location of the chapel. After the transference, a stone tablet was also hung on the chapel wall. This historical monument is registered in UNESCO list of national monuments. 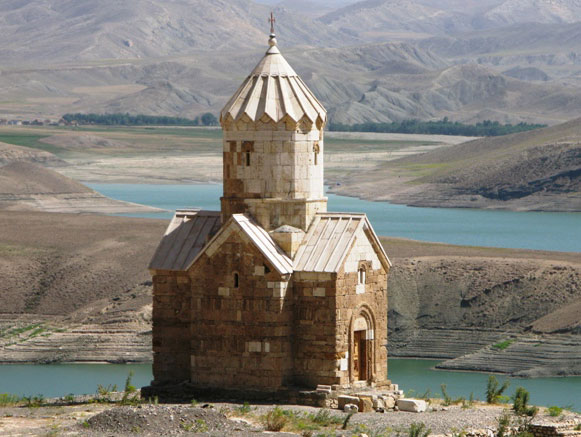 Dalanpar Tourist Area
Dalamper Mountain lies in West Azerbaijan Province, on the border of Iran, Turkey, and Iraq, 45 kilometers southwest of Urmia and 35 kilometers from Oshnavieh. Margavar District, also known as Iran's Alps, is a range of snow-covered hills and mountains up to 3500 meters high. Valleys, rushing rivers and waterfalls, lakes, and various wetlands of this district provide the travelers with a peaceful place. This mountain lies on the border of Iran, Turkey, and Iraq, on top of which all three countries are visible. It is noteworthy that Boralan wetlands located on the border of Iran and Turkey, and Dalamper Daqi , known as Iran's Alps, in the northwest of Iran have been declared "Peace and Friendship Parks". 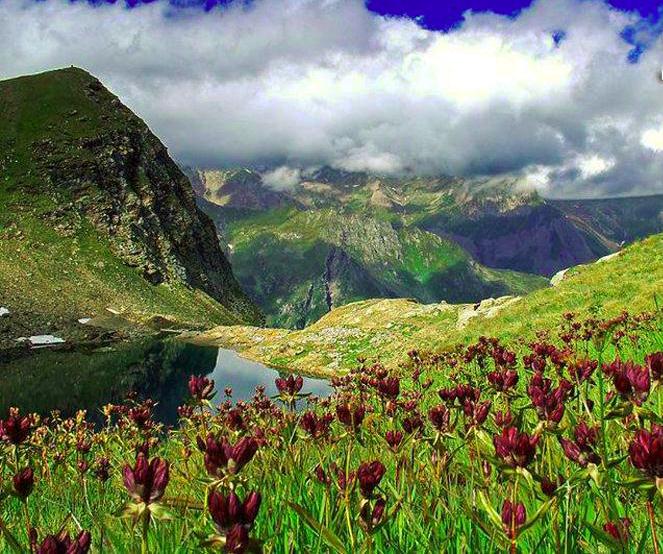 Baqcheh Jooq Palace Museum
Maku Baqcheh Jooq Palace, also known as Sardar Palace, has been constructed by Teimour Teimouri, one of the senior commanders (Sardar) of Qajar period. The main building of the palace has been elegantly adorned and it is now visited as a museum. Sardar's Furnitures are also on display in this museum. Construction of the monument started in Pashakhan's time and ended in Eqbal-al-Saltaneh's period. It took 30 years for its seven inner halls to be decorated. The palace lies in the middle of a large wooded garden with a variety of old trees, and it has an area of 11 hectares. Today, this monument has become a museum because of its artistic and architecture features, and tourists come to visit it every day. 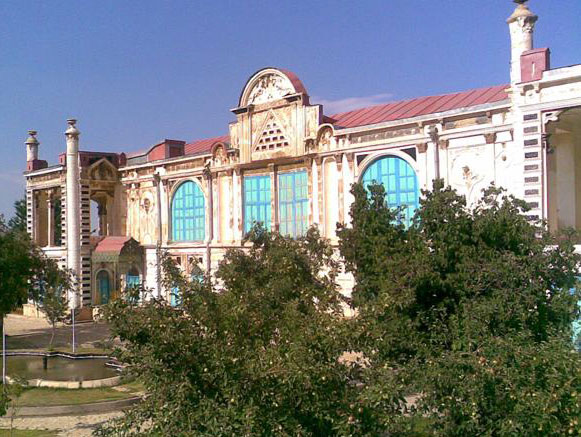 St. Mary Church (East of Assyria)
St. Mary Church, currently known as Sharq-e Assur (West of Assur), lies in Qods street, Urmia City, and is one of the unique historical monuments of Assyrian People in Urmia. The present view of the church belongs to Sasanid period which contains interesting vaults and beautiful symmetrization is comparable with the architecture of Sasanid fire temples. According to Assyrian and Christian authors, this monument used to be a fire temple and one of the famous temples of Zoroastrians. St. Mary Church has been refurbished several times and made asymmetric. It seems that the first refurbishment was done in 642 AD at the instigation of the then Sultan's sister of China. In 1963 and 1964, a new tower was added to the church, and the church was refurbished. 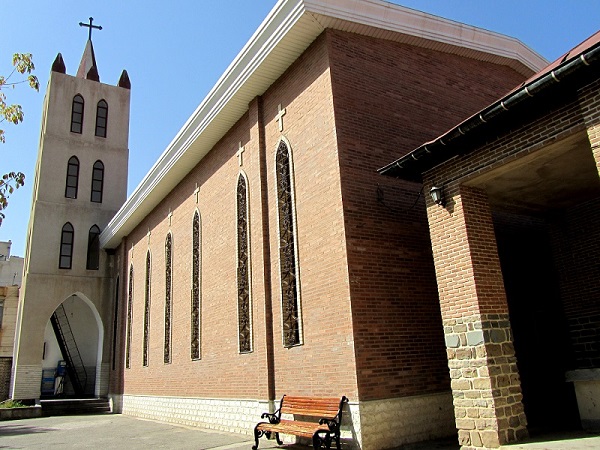 Sehollan Cave
Sehollan Cave is one of the most important and unique natural caves of the country and West Azerbaijan Province which has been known by the inhabitants of the area since long time ago. Even before Christ, some parts of the area were settled by people. This cave was first discovered by French Jacques de Morgan, and then it was investigated by Iranian speleologists. Archeological researches and excavation operations led to the discovery of human artifacts from Centuries 4 and 5 BC. This cave is registered in the list of Iran's National Heritage. In Kurdish Language, "Sehollan" means "frost", and local people also call the cave "Kooneh Kotar", i.e. pigeon nest, for there are many pigeon nests inside the cave. 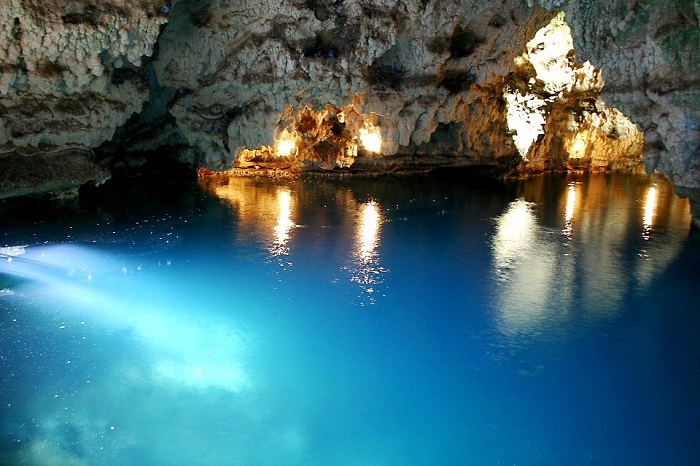 Kani Gravan Spring
Kani Grawan Spring is located 12 kilometers northeast of Sardasht County in West Azerbaijan province, and it is considered as a tourist attraction in Sardasht. This spring lies beside a village named "Kani Gaviz" in the southeast of Zab Basin, from which boiling watr comes out. Kani Grawan is a mineral spring. It is estimated that in each liter of the spring water, there is at least one gram of dissolved salt. 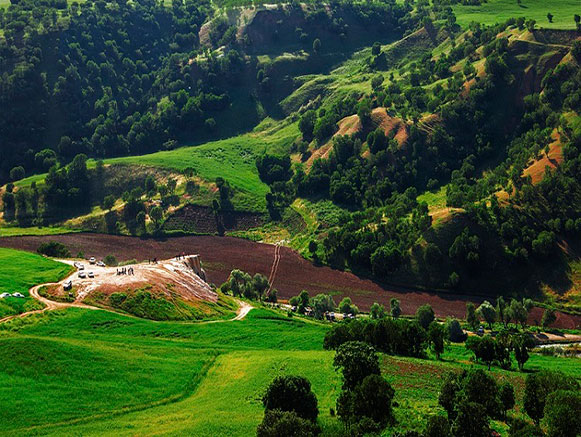 Kelashin Stele
Stone Stele of Kelashin has been discovered near Kelashin village northeast of Iraq, about 200 meters to the border of Iran. Steles of Kelashin, Mavana, and Mahmudabad are the most important monuments of Urartian civilization in Urmia Museum of Archeology. Archeologists believe that this pillar was built in this place (its previous place) by اشیونی, the king of Urartu, in 814 BC. The first person that introduced this stele to the world was Schultz, the German archeologist, who discovered this stone in 1829 and duplicated it. Some days after dupplication, however, he was murdered and the duplicated stone was destroyed. Eventually after so many investigations during some years, Persil, the famous Assyriologist, could manage to translate it. This pillar has two sheets on each of which some scripts are written in Assyrian and Urartian languages. One of the sheets contains prayers for the city رب النوع and the other one contains the explanation of war plans. 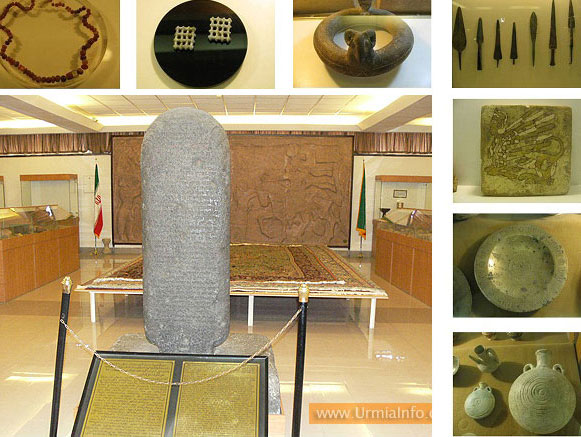 Khorenj Village, Piranshahr
The word “Khorenj” means (area of the vote) which means full of stones. Here the name and the content agree. In fact, Khorenj is full of decorative and legendary stones. Khorenj is one of the one hundred villages in Piranshahr County that is located in the north west of Iran. The legendary stones behind this village (north of the village) that are four thousand meters long and four hundred meters wide have decorated Khorenj Village. There are various fruits and blessings among these decorative stones such as: 1. Figs in four tastes and colors (yellow, red, black, blue), 2. Raspberries (red and black), 3. Cherries (yellow, red, black), etc. and most importantly, there is clear and lucid water in the highest point of these rocks that supplies the drinking water of all the villagers. Each and every point of the stones has a specific name that will astound every visitor. It is noteworthy that there is a point called Zendan (Prison) at the back of the aforementioned mountains and that is the crypt at ground level with unknown depth where the sound of water and wind can be heard and going through which is difficult and impossible. 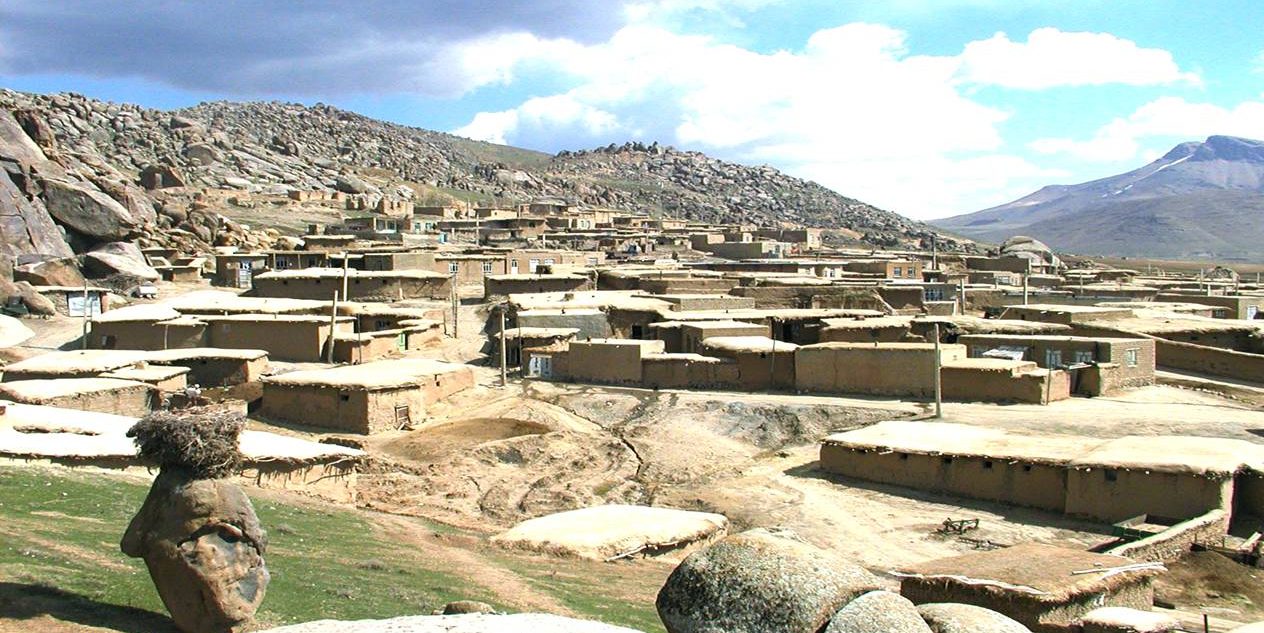 Qara Kilisa
Also known as St. Thaddeus Monastery, Kara Kilise has been registered in UNESCO World Heritage as the ninth monument of the country. It is one of the most beautiful historical monuments of West Azerbaijan Province which attracts very tourist with its unique and special architecture. Kara Kilise is among Armenian religious monuments in Iran which has been demolished and reconstructed in different periods. A huge part of the monastery was torn down at the time of the Mongolian Changis Khan's attack for the first time. However, it was refurbished in Hulagu Khan's reign by Khawaja Nasir al-Din al-Tusi. Every year on June 26, Armenians around the world go to this place to visit St. Thaddeus Monastery. In addition to them, some Christian countries ambassadors who work in Iran as well as foreing toursist accompany Armenians in visitng ceremony of St. Thaddeus Monastery. 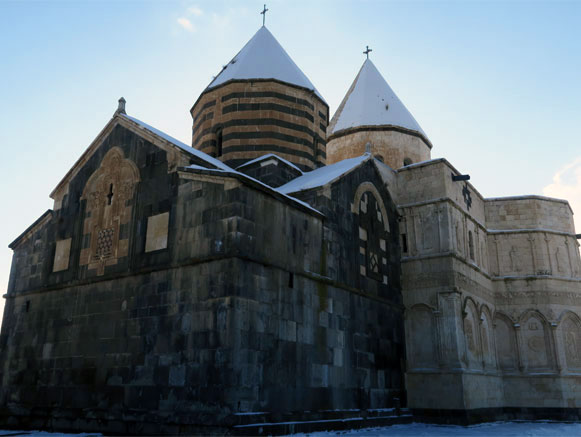 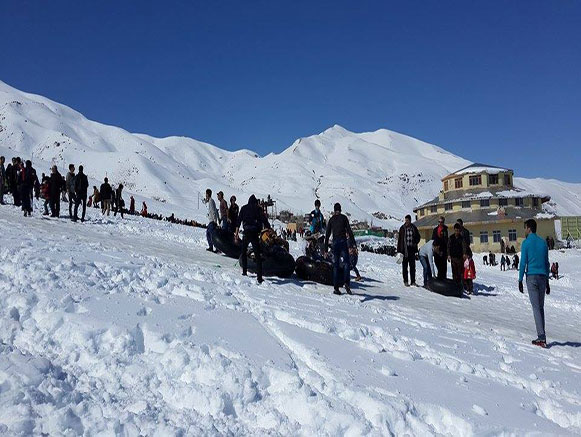