Bushehr province is of the southern provinces of Iran in terms of having the largest are is the seventeenth biggest province and is located at the region of the Persian gulf. Bushehr Bandar (port) is the center of this province. Due to being located at the strategic Persian gulf coast, maritime exports and imports, fishing industry, having natural gas and oil reservoirs, agriculture and palm orchards and having nuclear power plant, this province has special strategic and economic importance; so much that it has been called the energy capital of Iran. Struggle of the Tangestan people against the foreign forces during the last century is of the important historical indicators of this province. 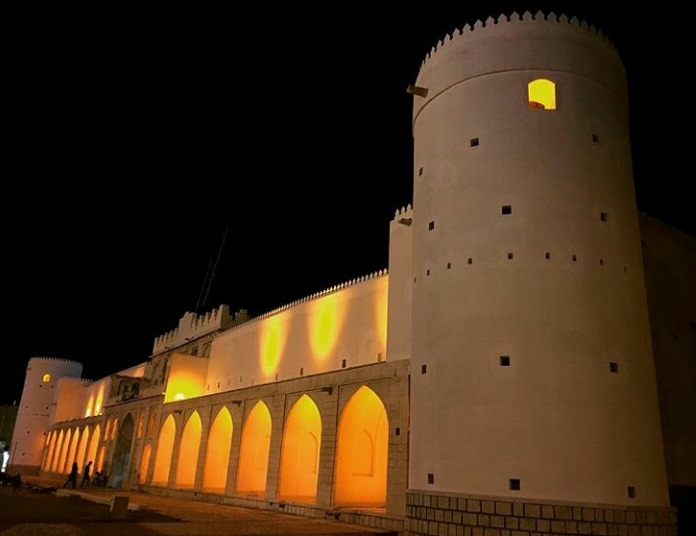 Tuz Historical Region
Tuz is one of the eldest and affluent and most populated cities of old Dashtestan which had a particular popularity and credibility during the Sassanid era. Tuz used to be the most important city in Dashtestan before Islam and in the first Islamic century. Toz or Touj city which today its relics and remnants are located in Dashtestan town was one of the important urban-industrial and commercial centers of Iran and the coast areas of the Persian Gulf during the Sassanid era and the early Islamic centuries, which even kept its dynamism and activities until the Buyid (Deylamites) dynasty. Most of the popularity of Touj city was because of its precious cloths woven for kings and exported to the whole world of that time. 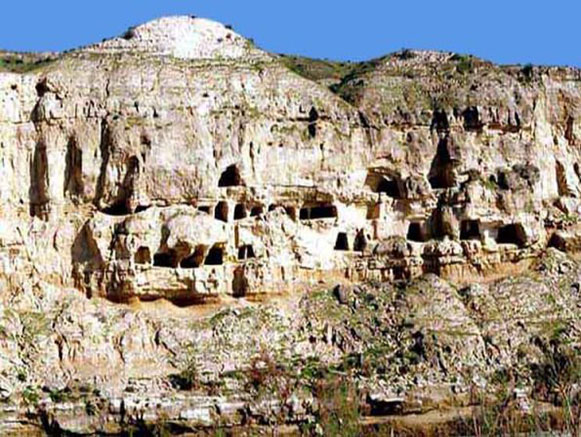 Kalat Temple
Kalat Temple is located on the slopes of Mand Mountain at 30 kilometers of Khormoj. This temple is carved like mount masonry inside the rock. Its exterior view includes an entrance with arched ceilings. And it also has another two entrances one on the right and one in the left side of Shah Neshin's podium (where king's sit). And these main entrances were considered as the windows and skylights of the main portico of the temple. 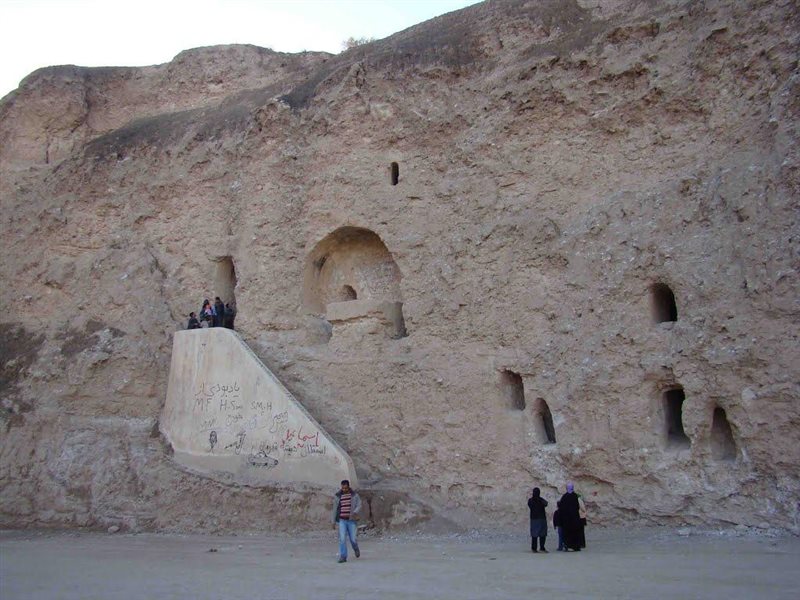 Nasuri Castle, Siraf
Nasuri Castle in Bandar-e Taheri in Kangan County is one of the historical monuments and sights of Bushehr Province in the south of Iran. “Nasuri Castle” is located 250 kilometers from Khavar in Bushehr Province. Nasuri Castle isalso known as “Sheikh Castle” and is for the early Qajar period. The castle was built by the order of Sheikh Jabbar Nasuri about 180 years ago and its architect was Ali Asghar Shirazi. Materials used for this building are enormous rocks and mud and gympsum. The entrance of the castle is in the souther side and faces the Persian Gulf. The gate is enourmous and wooden with studs and carvings. 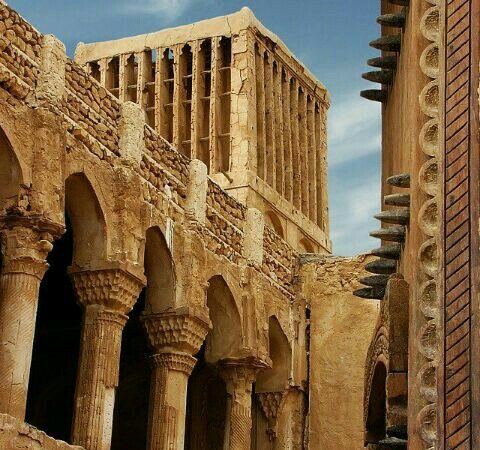 Persian Gulf
Persian Gulf is a sea along Oman Sea between Iran and the Arabian Peninsula. After the Gulf of Mexico and Hudson Bay, Persian Gulf is the third largest gulf in the world. From the east, it is connected to Indian Ocean and Arabian Sea through Hormuz Strait and Oman Sea. From the west, on the other hand, it leads to Arvandrud River Delta which stems from the connection of Tigris and Euphrates Rivers and the flow of Karun River into it. Iran, Oman, Iraq, Saudi Arabia, Kuwait, UAE, Qatar, and Bahrain have a coastline on the Persian Gulf. The northern coast of the gulf totally belongs to Iran's political geography. Due to the affluent oil and gas resources in Persian Gulf and its coastal areas, this area of water is considered an internationally important district. April 30, which coincides with the deportation of the Portuguese from Hormuz Strait, has been named "Persian Gulf National Day". 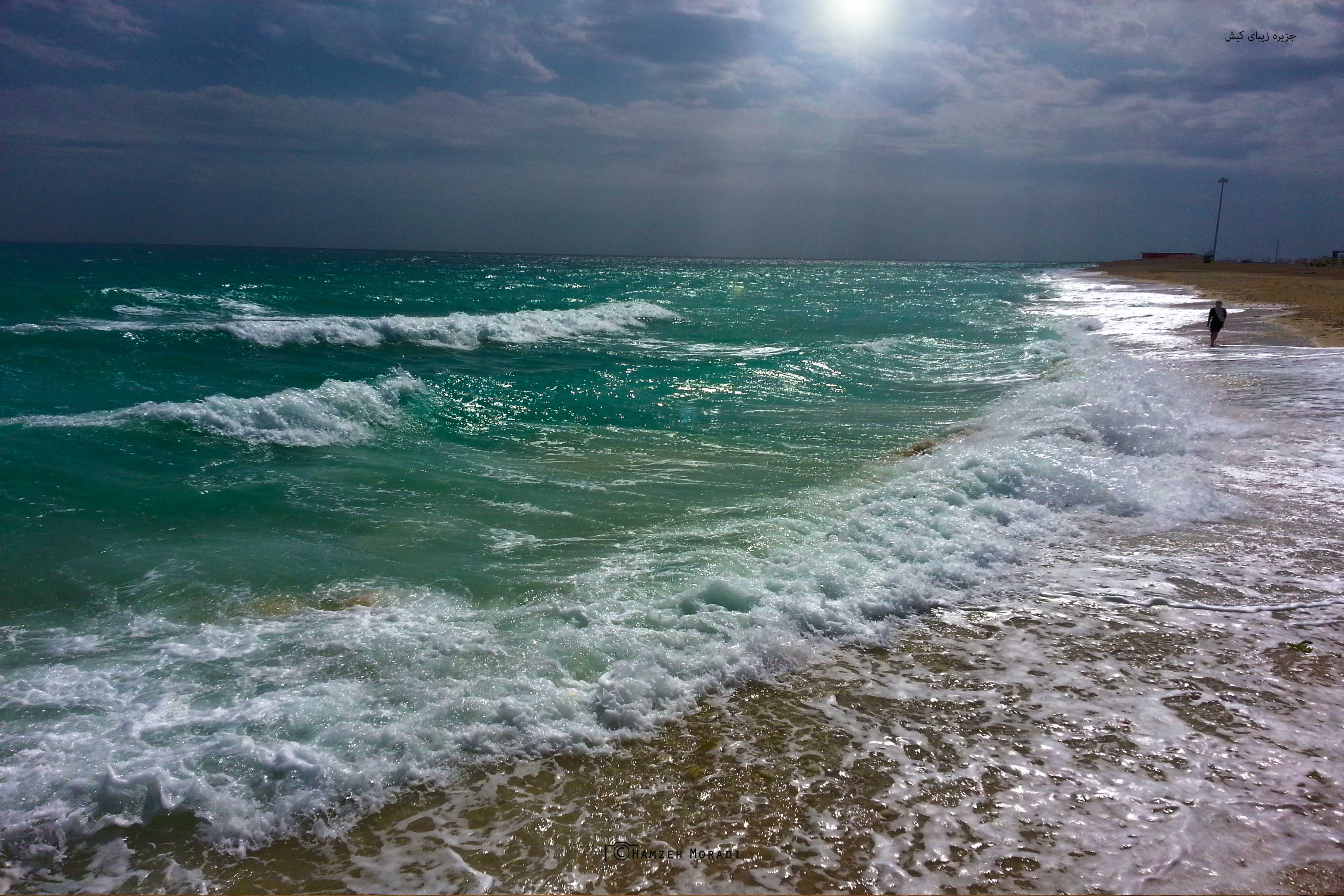 Khormoj Castle
Khormoj castle or Muhammad Khan Dashti castle is located in Khormoj town, the center of Dashti town and it is one of the historical and spectacular relics of Bushehr province in southern Iran. Khormoj which currently only one of its towers is left used to have four palisades, four towers, indoors, central building, guard house and a stable. A part of this castle is known with the name of Muhammad Khan Dashti castle and the other part is known as Jamal Khan castle. The architecture style of this castle is the Seljuqi style and it is influenced by the Sassanid castle making style which it is constructed with arcades and moldings in the decorations of walls and inside the rooms. This relic which is one of the architecture samples of Qajar dynasty has innovative and unique decorations and was registered in 2000 in the list of national relics with the registration number of 3032. 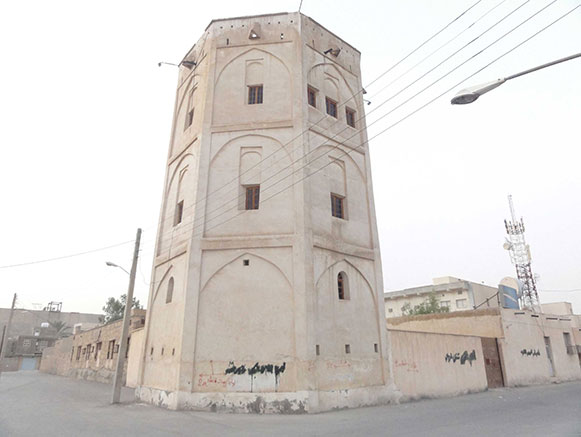 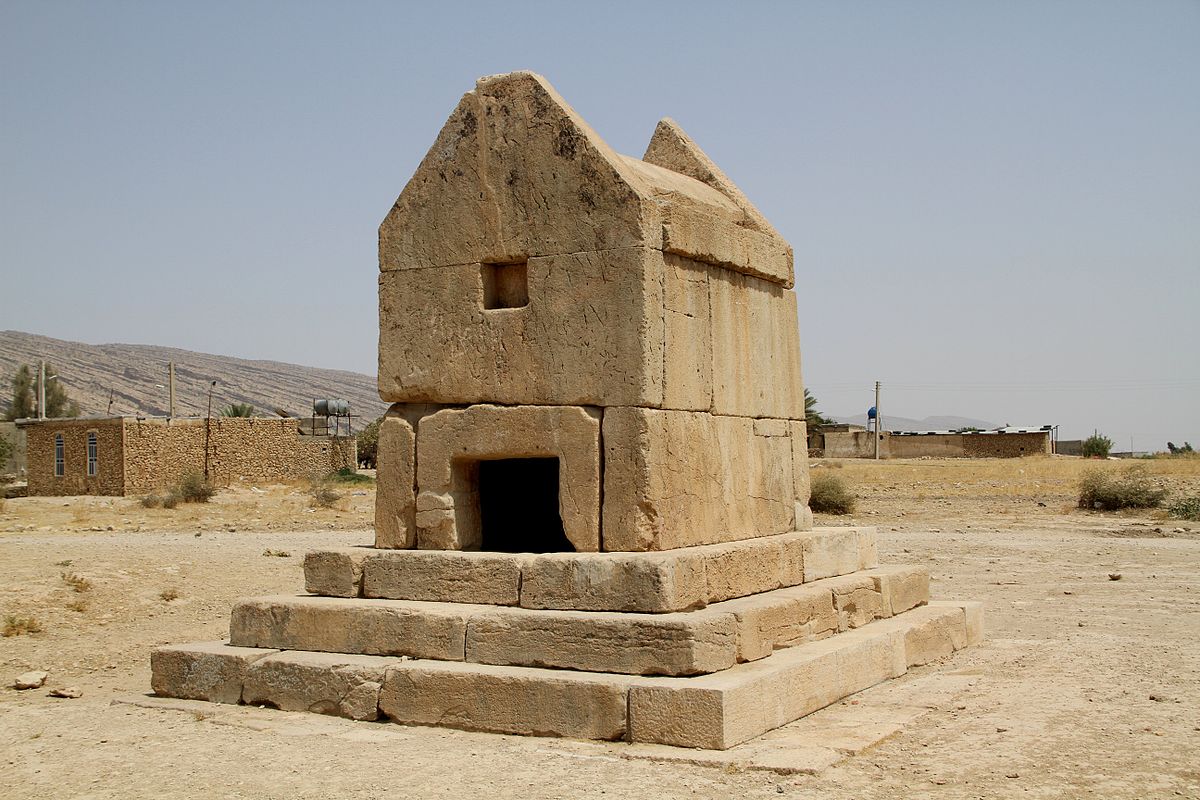 Bardak Siah Palace
Achaemenid Empire form a huge part of Iran’s history. This is why the ancient areas of this era are very important. Bardak-e Siah which is called the Achaemenid town of Tamoken is one of the historical relics left from that glorious era. This ancient area is a castle from the time of Darius I located in Dashtestan and in the approximate distance of 70 kilometers from the Persian Gulf. 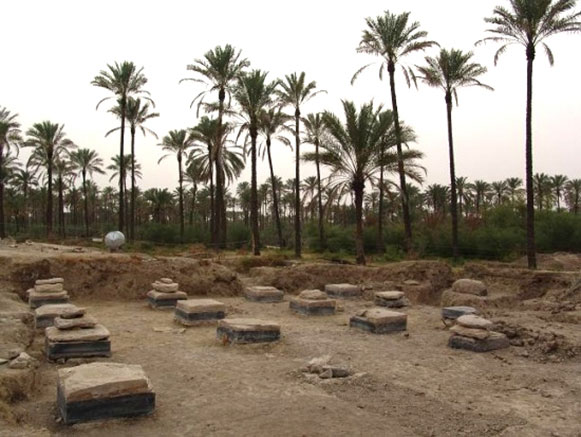 Chehel Khaneh Cave
Chehel-Khaneh Cave is one of the caves and tourist attraction of Bushehr Province located in Zirah Village 7 kilometers from Saadabad City in Dashtestan County, and 27 kilometers from Borazjan-Ganaveh Port Road. This cave consists of a set of chambers (dakhmas) that have been created on a mountain range overlooking Shapoor River. The internal parts of the dakhmas differ in size, and this difference depends on the resistance of the mountain's stone against erosion natural factors such as flood. These dakhmas are interlinked from inside and there are niches and streams in each of them. The dead bodies of Zoroaster's followers would be put in these dakhmas. Some of the dakhmas have been destroyed by the passage of time and due to natural factors. Currently, 23 of those dakhmas are remained intact. In fact, this cave was called "Chehel-Khaneh" because of the large number of its dakhmas. 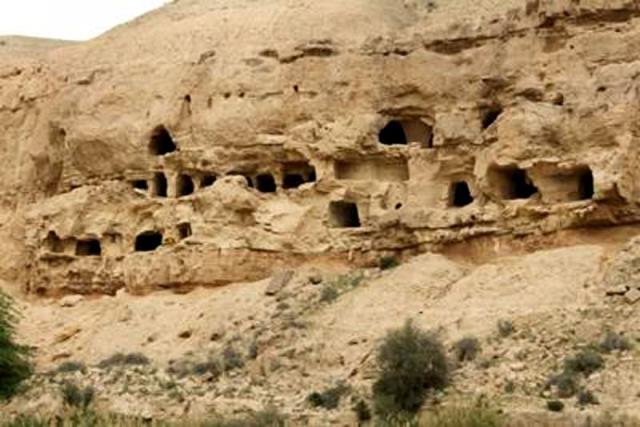 Nayband National Marine Park
Nayband National Marine Park is one of the national parks in the south of Iran that with an area of more than 42 thousand hectares in Bushehr Province was recorded in 1382 by Supreme Council of Environment Protection as the first national marine park of the country. Nayband National Marine Park, located in the south of Bushehr, is comprised of invaluable and rare plant and animal species and the most important feature of it is existence of various hollow, sandy, coral and forest beaches. This park is one of the most invaluable marine habitats in Persian Gulf that includes coral complexes, seaweeds, numerous coves, mangrove forests, beautiful sandy beaches, rocky shores and old fig trees of temples and is the most appropriate place as an ecosystem. There are 7 areas (Nayband National Marine Park, Deyr-Nakhilou National Park, Mond Protected Area, Heleh Protected Area, Khark Wildlife Refuge, Jashak National Natural Salt Mountain and Kharko National Natural Monument) under management in Bushehr Province at the moment with an area of 152477 hectare as well as two prohibited hunting areas (Mond Mountain and Tang-e Bahush Mountain- Shahzadeh Ibrahim) with an area of 106266 hectare. 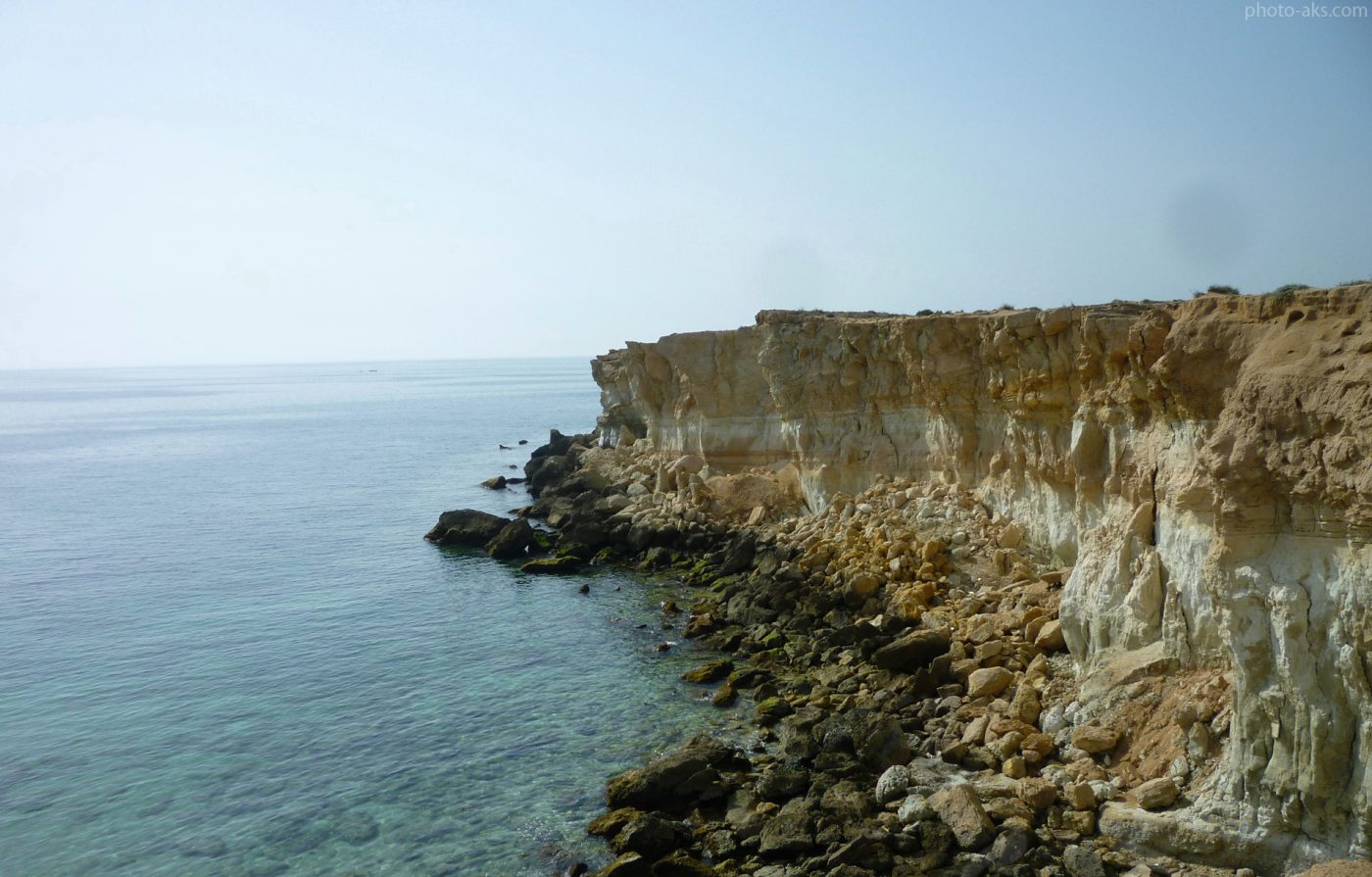 Jashak Salt Dome, Dashti
Dashti or Jashak Salt Dome or Salt Mountain is a vast and high region in the north west of Jashak Mountain on the Sothern end of Zagros Mountains and between Deyr County and Dashti County in Bushehr Province. It is one of the greatest and most active and spectacular salt domes in Iran and Middle East and one of the sights in Bushehr Province that was registered in Bahman 1386 as a national natural fossil monument and as one of the four regions under Environmental Protection Agency supervision. The most important and obviously different property of Jashak Salt Mountain is the type of salt on these salt mountains, domes and its unique caves, waterfalls, crystals, etc. Jashak Salt Dome is the eighty eighth natural monument in the list of Iran’s natural heritage that was recorded by Cultural Heritage Organization on 20th of Bahman 1389. 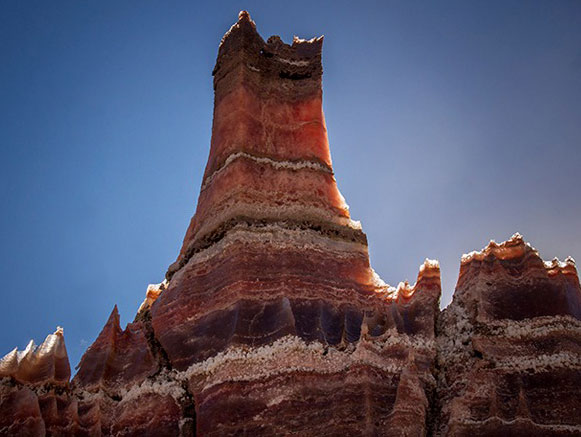