Golestan Palace
Golestan Palace goes back to the reign of Safavid Shah Tahmasp I, and consists of some separate palaces and mansions the most important of which was built in Qajar period as the Qajar kings’ place of residence. Golestan Palace has been the place of residence for some kings like Agha Mohammad Khan Qajar, Fath-Ali Shah Qajar, Naser al-Din Shah Qajar, Mozaffar ad-Din Shah Qajar, and other Qajar and Pahlavi kings mostly resided in other Palaces of Tehran. This palace was registered in the list of World Heritage in 37th annual convention of UNESCO World Heritage Committee in Phnom Penh, the capital city of Cambodia. 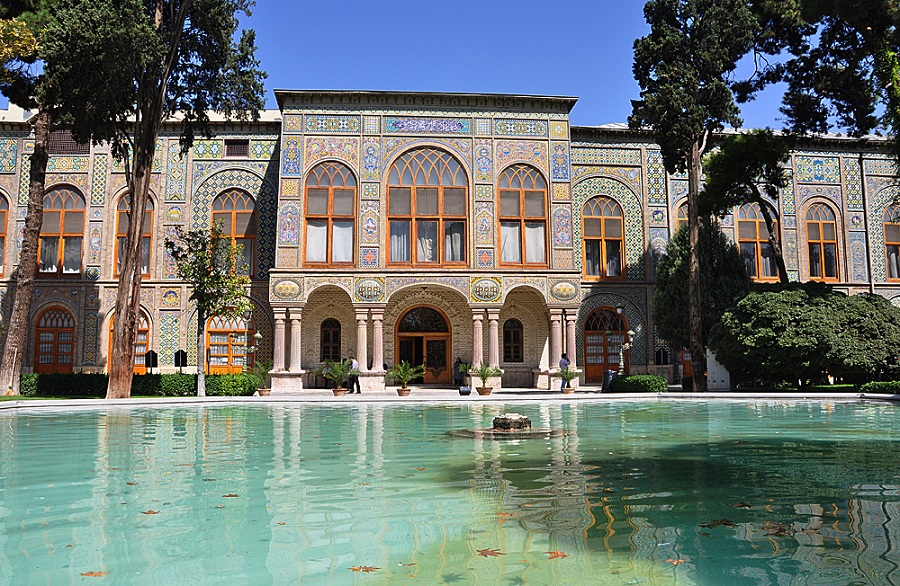 Azadi Tower
Shahyad Tower, whose name changed to Azadi Tower after Iran's Revolution in 1978, is one of the city symbols of Tehran that was built in 1970 by Hossein Amanat, the Iranian architect. Shahyad Tower was designed and constructed in the middle of one of the main squares of west of Tehran as the symbol of "Modern Iran" in order to commemorate 2500-year celebration of the Persian Empire. The architecture of the tower is a mixture of Achaemenid, Sassanid, and Islamic architecture. Azadi Monument consists of a variety of sections including the passage of ancient people, ancient hall, Iranian studieshall, Iran Nama, ceremonies hall, mirror hall, waiting room, information hall, theater, library, and picture gallery. Ancient symbols of Iranian architecture have been used as model in constructing this tower. According to some surveys, a majority of Tehran citizens consider Azadi Tower as the symbol of Tehran. This tower was registered in the list of Iran's National Heritage in 1974 under the registration number of 1008. 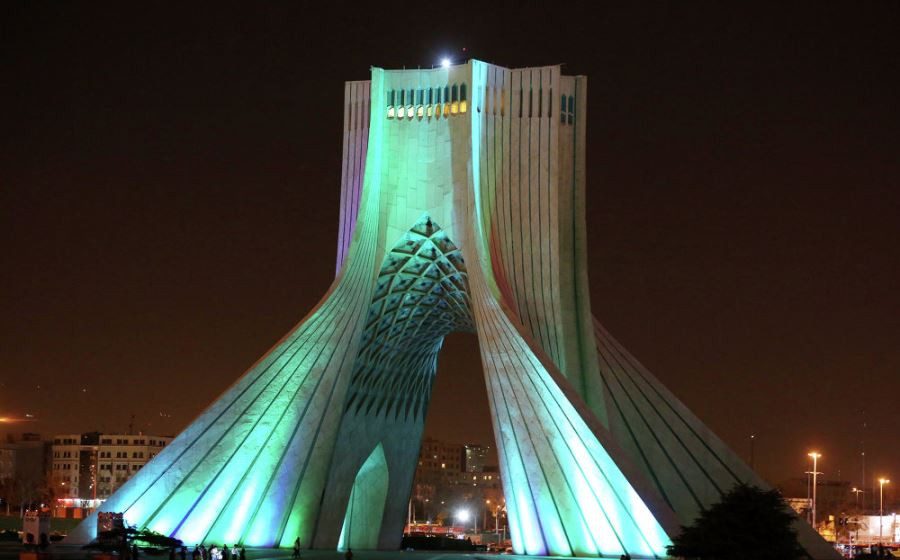 Sepahsalar Mosque and Seminary
Sepahsalar Mosque and Seminary were the first and the greatest mosque and higher education school in Tehran whose design is a combination of Iranian architecture and the architecture used in Istanbul mosques. In general, the design of this building is inspired by Isfahan Jameh Mosque and Isfahan Chahar Bagh School and Hagia Sophia Mosque in Istanbul. Mirza Hossein Khan Sepahsalar ordered in 1296 hijri year to build a mosque which is now one of the most elegant buildings in Tehran. Momtahen al-Dowleh designed it and Haj Hassan Ghomi was the architect. The other aspect that magnifies the significance of this mosque is its library. There is now a treasury of more than 4200 manuscripts by compilers and about 10 thousand lithographic books in the library. The building was registered in the list of national monuments in 1315 with registration number 260. 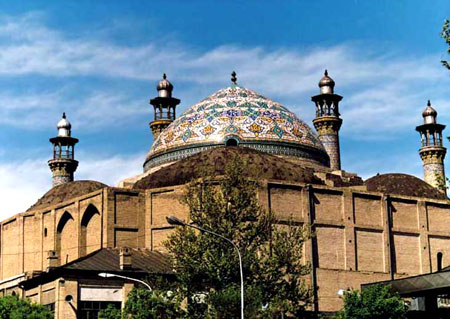 Sa'dabad Palace
Sa’adabad cultural-historical complex consists of 18 small and large palaces belonging to Qajar and Pahlavi dynasties. It is located in Darband Valley, the northernmost and freshet istrict in Tehran. The complex is one of the largest and most important museum complexes of Iran and the world, whoses visiting in during New Year holidays could be enjoyable. The oldest palace here is “Ahmad Shahi Palace” whose construction was finished in the first years of his reign. The newest palace, on the other hand, is “the Palace of Leila Pahlavi”which belonged to the youngest daughter of Mohammad Reza Pahlavi. This complex houses a variety of valuable palaces and museums. Some artworks of different countries are also being displayed in “the Museum of Nations’ Art” in Sa’adabad Complex. Sa’dabad Complex was registered in Iran’s National Heritage in 1997 under the registration number of 1957.

Niavaran Palace
Niavaran cultural-historical complex is located in a large garden with an area of 11 hectares in the north of Tehran, which is a significant natural-historical attraction. The monuments of this complex belong to Qajar and Safavid periods. This garden contains several historical royal monuments including Ahmad Shahi Pavilion, Sahebqaranie Palace, and Niavaran Palace. There are exquisite artworks from Iranian artists and valuable objects gifted by foreign governments as well as admirable architecture of Iran’s history that attract every tourist and visitor. This cultural-artistic complex is one of the honors of art history of Iran and the world.

Ferdows Garden of Tehran
Ferdows Garden is one of the precious and historical houses of Shemiranat district of Tehran, and it is located in one of the old neighborhoods of this district with the same name. It is left from Qajar dynasty until today, and it was being used as Cinema Museum since 2002. The garden area is 20 thousands square meters and the building is established in three floors and one underground floor with a 1000 meter foundation. The floor tilt of this building is from north west to south east, and the severity of this tilt is so much that the first floor is in the same level of the southern part of the garden and its ceiling is in the same level of the northern part of the garden. Ferdows Garden building is full of beautiful moldings, round and thick pillars patterned all around with artistic moldings. This relic was registered in August 2th, 1997 as one of Iran’s national relics with the registration number of 1876. 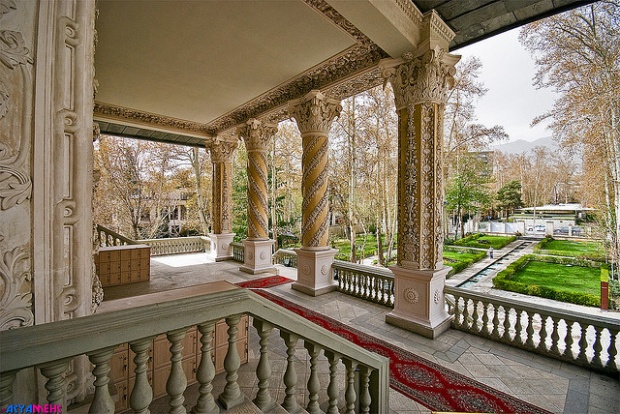 National Museum of Iran
The National Museum of Iran lies in Tehran, and it is considered as one of its attractions. It consists of two separate buildings called "Ancient Iran Museum" (founded in 1937 AD) and "Museum of the Islamic Period" (founded in 1996 AD). Currently, the National Museum of Iran consists of 13 sections including pre-history, historical, Islamic, Stamps and Coins, refurbishment, inscriptions, library and document center, Iran's history of art, nations' civilization history, public relations and information database, and physical protection sections which have been run in the internal part of the museum during years. Construction of the museum was initiated by Andre Godard, the French architect, on May 11, 1934 at the instigation of Reza Shah. It was finished in 1937, and the museum was opened to the public. National Museum of Iran is 60 years old. Not only is the National Museum the largest museum of archeology and history in Iran, but it is also considered as "the Mother Museum" in Iran's museum management culture. 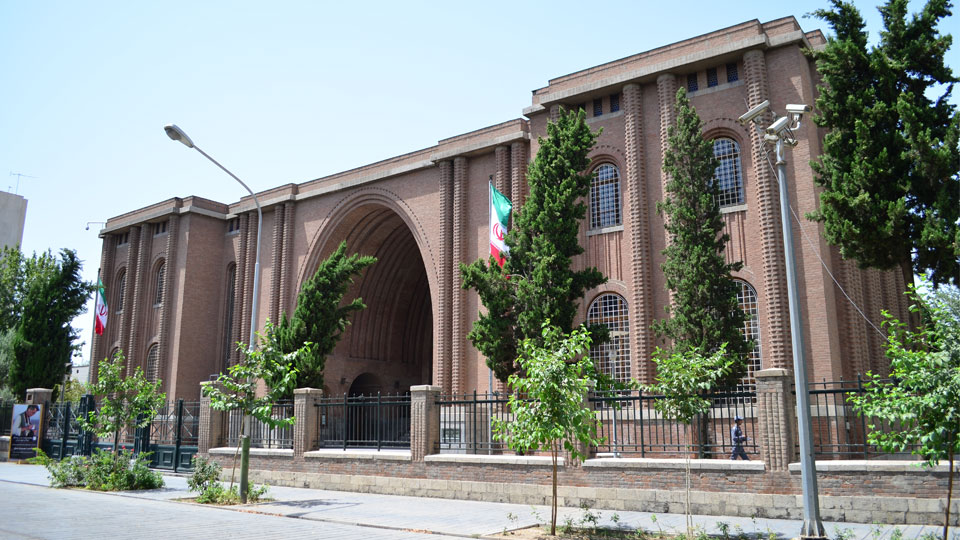 Saint Sarkis Cathedral, Tehran
Saint Sarkis Cathedral or Saint Sarkis (Սուրբ Սարգիս մայր տաճար in Armenian) is the name of an Armenian church located on Karimkhan Zand Street at the beginning of Nejat Allah Street (previously Villa Street) in Tehran. Saint Sarkis Cathedral was established by personal expenses of an Armenian benefactor in Iran named Markar Sarkissian to the memorandum of his wife and it was designed by engineer Eugene Aftandilian in 1349 (1970). The seat of the caliphate was transferred to this place from Saint Marry Cathedral. This cathedral is also considered a symbol of Christianity in Tehran. It is noteworthy that the church dome was first on its walls. That is, the building had no bearing columns. However, after a while when the roof of the church started to fall down, the danger of the dome falling down was felt. Therefore, four columns were built under the dome to bear the dome weight. The memorandum church of Armenian martyrs of 1915 is located in this area and the tomb of the late bishop Ardak Manoukian, the prvious caliphate of Armenians in Tehran is located beside them. 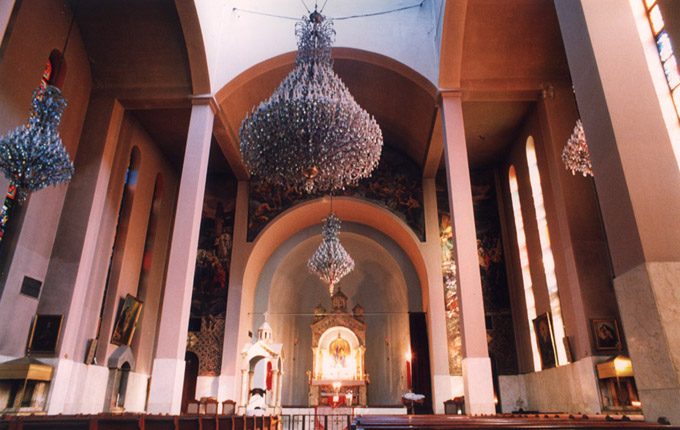 Tehran Grand Bazaar
The Grand Bazaar (Persian: Bāzār e Bozorg – بازار بزرگ‎‎) is an old historical market in Tehran, the capital of Iran. Located at the Arg Square in Southern Tehran, it is split into several corridors over 10 kilometres (6.2 mi) in length, each specializing in different types of goods, and has several entrances, with the main being the entrance of Sabze Meydan. In addition to shops, the Grand Bazaar of Tehran contains banks, mosques and guest houses. The bazar has access to Tehran Metro through Khayam Metro Station and Panzdah-e-Khordad Metro Station. 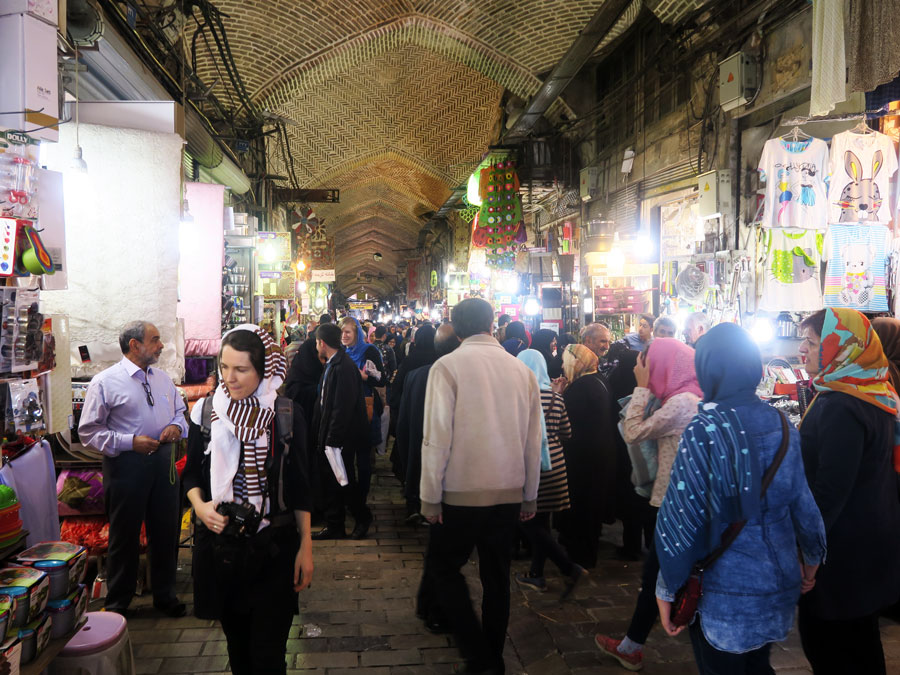 National Jewelry Museum of Iran
Museum of Iranian Crown Jewels is situated in the Treasury of Central bank of Islamic Republic of Iran. This treasury-museum lies in the construction of Iran’s Central Bank on Ferdowsi Street, Tehran. Many of the Iranian royal jewels from Safavid, Afshar, Qajar, and Pahlavi dynasties are presented in this museum. They include Darya-ye Noor Diamond, Jogheh Naderi (Naderi Paisley), Farah Pahlavi’s Crown, Kiani Crown, Javaherneshan Globe , Sun Throne, and Naderi Throne. Iranian Crown Jewels are so artistically, historically, and uniquely important that even the most skillful experts and evaluators of the world have failed to determine its real or approximate value. The precious objects and jewels of this treasury make up 75 percent of Iran’s cover for banknotes. 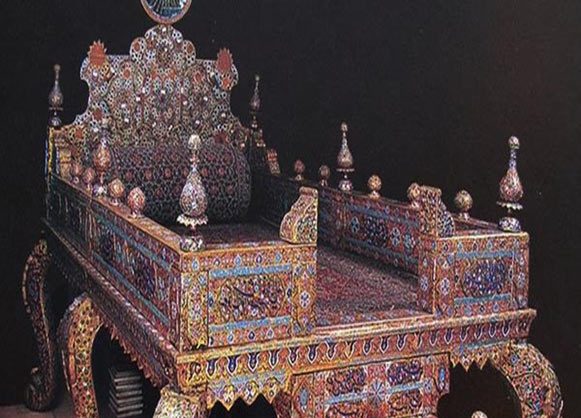 Reza Abbasi Museum
Reza Abbasi Kashani Museum opened in 1356 in front of the Electrical Engineering Department of Khajeh Nasir al-Din Tusi University in Shariati Street in Tehran and it was named Reza Abbasi after the famous painter of Safavid era from Kashan. This museum includes art works from pre-history up to thirteenth century. Including the Office of Administration and Maintanance, the museum has 2 laboratories to maintain paintings and metal objects. Its library with more than 1000 books in Persian, English, French and German and its publication with invaluable resources on cultural heritage, exhibition and store are its different parts. 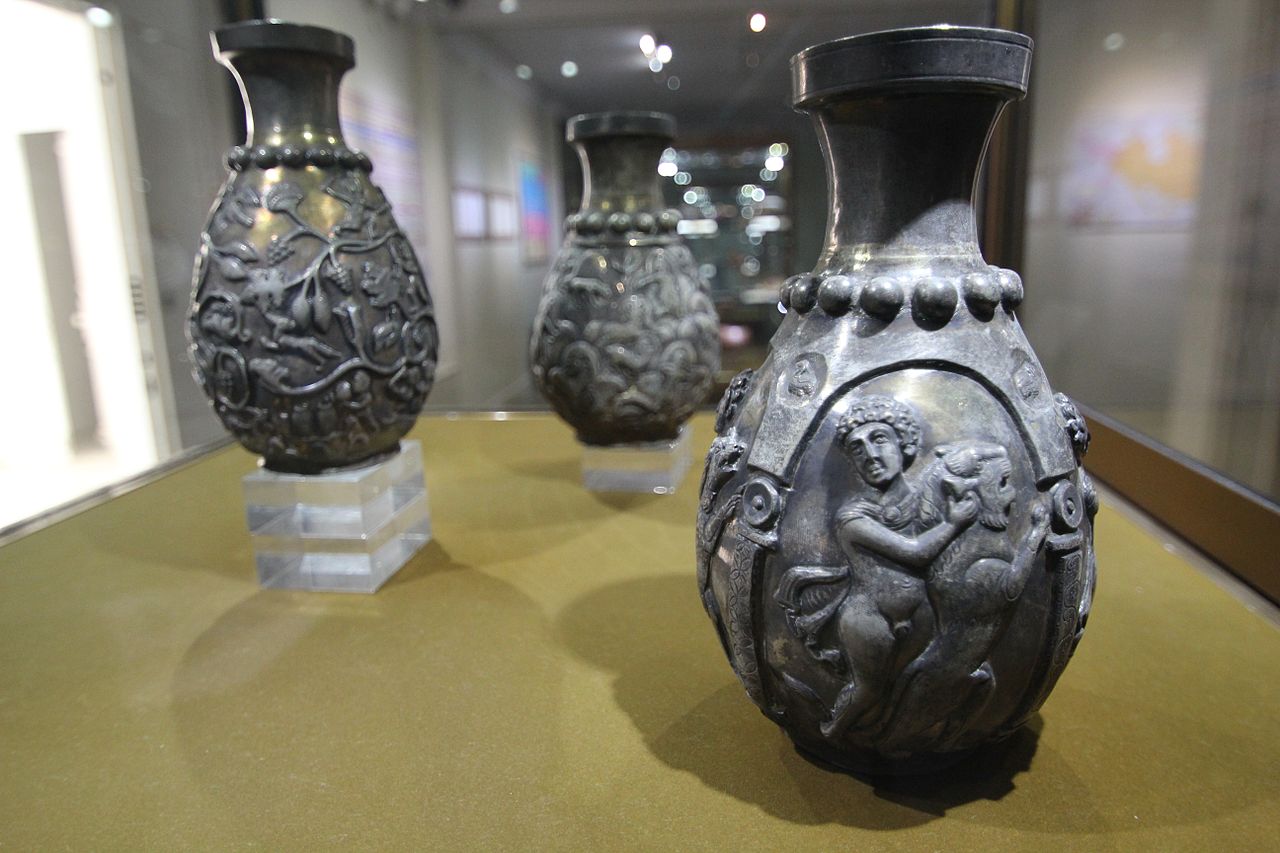 Sardar-e Bagh-e Melli
SarDar-e Bagh-e Melli (the national garden transom) and its neighboring buildings are all left from Qajar era and was built by Jafar Khan Kashani and with the help of Germans (before the start of WWII) with the direct order of Reza Shah in Tehran, where was the capital of Iran. This transom was constructed in the eastern side of the former transom with the same shape and size, and after that, the former transom was demolished. Before the establishment of Azadi tower, this transom was considered as the symbol of Tehran city. This relic was registered in the list of Iran’s national relics in April 22nd, 1997 with the registration number of 1968. 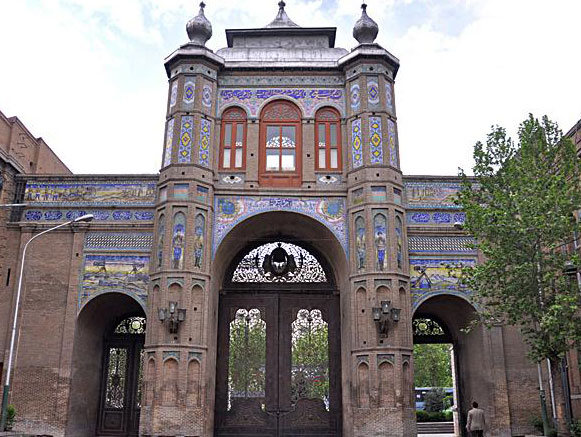 Fashafuyeh Recreational Lake
Tehran has no beaches. When you visit its sides, you either reach the desert or mountains, forests and beaches belong to the other side of the mountains. But you shouldn’t move that way, you have to turn around 180 degrees and move toward Imam Khomeini Airport. I want to give you the address of a lake in the southern desert of Tehran. In fact, I even suggest you to have a fine swim; when you haven’t still reached the airport, in the kilometer 18 of Tehran – Qom highway, there is a lake that has all the leisure facilities of Kish, Qeshm, Turky, Emirates facilities and to be brief, it is the destination of any tourist travelling around Tehran. 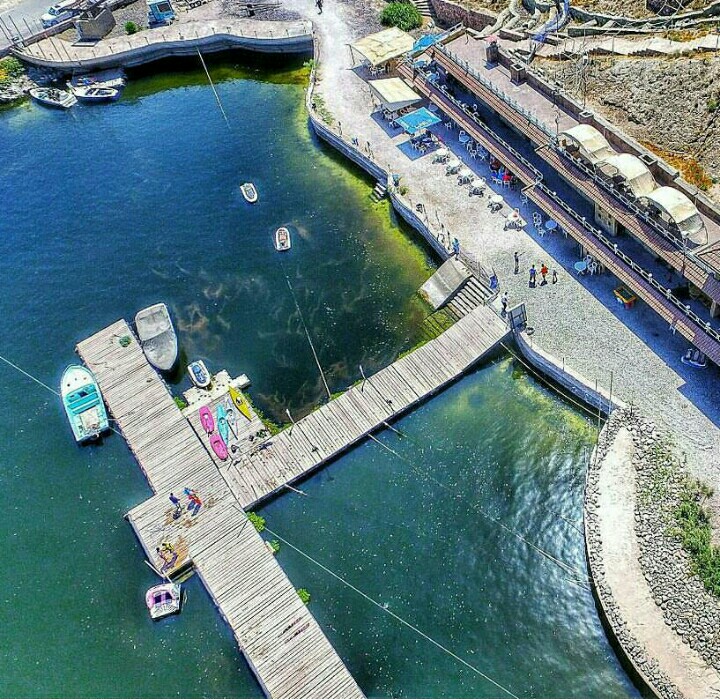 Time Museum
Passage of time has been an issue that has always involved human mind throughout the history. Hence, human beings have always attempted to find a tool to measure time. Primary humans would probably arrange their activities according to the sunrise, advent of the night and starts. However, tools such as sun clocks, water clocks, sand clocks, fuel clocks and other mechanical clocks were gradually made. “Time Museum” is the place that has manifested parts of human attempts to create tools for measuring time. 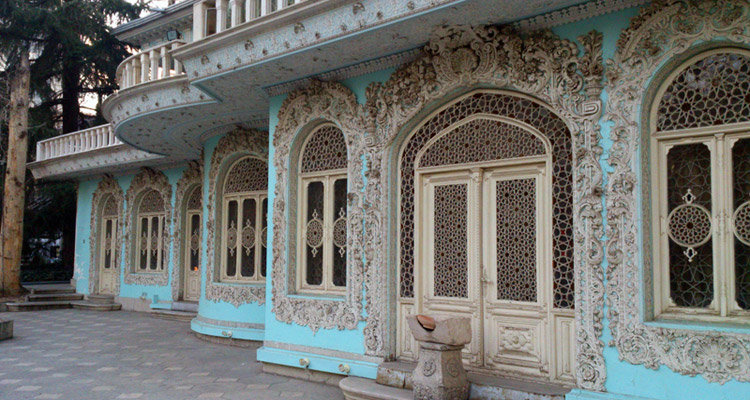 Masoudieh Palace
Masoudieh Palace is related to Qajar era and is located in Baharestan Square in Tehran. It was registered in the list of Iran’s national monuments on 27th of Dey 1377 with registration number 2190. Masoudieh Palace Garden was built in 1295 hijri year to the order of Masoud Mirza, the governor of Isfahan known as Zal al-Sultan, son of Nasir al-Din Shah after Agha Mohammad Khan by the supervision of Reza Gholi Khan (known as Seraj al-Molk) on a land with 4000 square meters with a combination of exterior (Court House) and interior sections and other parts. In fact, the name of this mansion was taken after Masoud Mirza and called Masoudieh. The architect of the palace was master Shaban Architect and its supervisor was Mirza Gholi Khan known as Seraj al-Molk. 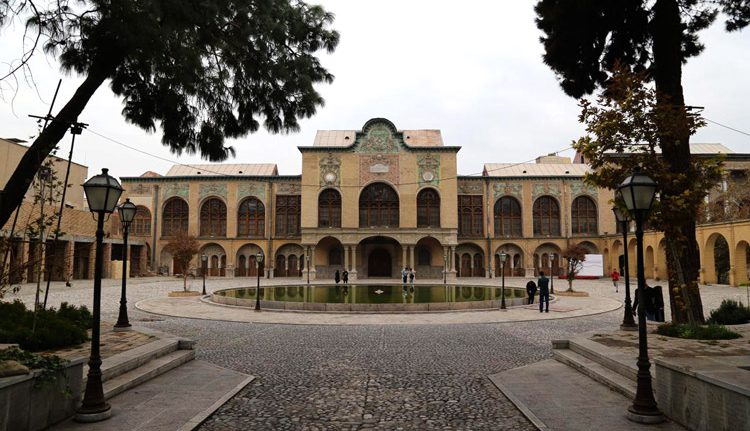